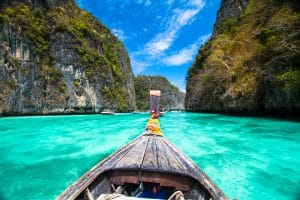 Before the world wore a mask, I spent as much time as I could traveling!

I think there aren’t enough fat positive travel voices out there and while it can be stressful to try and be body positive in a strange land, it’s also a challenge I enjoy.

In 2016, I traveled across Asia for 6 amazing months. I landed in Bangkok on a one-way flight and had a sudden wave of anxiety rush over me.

Here I was, halfway across the globe in a strange land.

But that’s all part of the fun of travel and instead of letting that anxiety get to me I leaned into it.

And the 6 months that followed were some of the best days of my life!

But it wasn’t all fun and games. The body and fat positive movement hadn’t made it to Asia at that time.

In fact, it still hasn’t in many parts.

Did I get some strange looks? Did people talk?

But I didn’t let it bother me. I wanted to represent myself and my body with confidence and not shame.

While I may not have changed any minds, I did remind myself that part of staying fat positive is getting out there and living life.

That means hitting the road on a bicycle, taking horseback riding lessons, and if you’re especially brave even skateboarding!

Fat people can do all these things…and a whole heck of a lot more. Many people, even in the fat-positive community, wouldn’t suggest going to Asia. The people aren’t friendly to bigger folks and everything is going to be too small.

And everything was smaller, that’s for sure.

But I had a blast, made some new friends and I don’t regret a thing. If you get out there and do what you want to do, I don’t think you will either.

And remember to Live Life Big!