Skip to content
Written by Leo Reed in Fat Questions last updated August 2021
LiveLifeBig.net may earn a small commission when you use one of the links on this page to purchase. 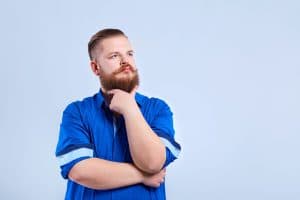 Fat guys want to look good too and even though not every big dude wants to become a fashionista, there are some basic style guidelines that can make a huge difference for big dudes.

As a bigger guy, you’ve probably already heard quite a bit of advice around stripes.

Are they good, are they bad and should fat guys wear stripes?

Just to be clear, the goal isn’t to try and be something we’re not. I’m fat and proud, baby!

But just like anyone else, fat guys want to look good, and picking the right style to match your body is just part of it. It’s no different from picking the right haircut for your face or enjoying the look of a brand new pair of shoes.

So let’s take a closer look at why prevailing wisdom might not be wise when it comes to stripes.

What Is The Helmholtz Illusion?

The Helmholtz Illusion states that “A square composed of horizontal lines appears taller and narrower than an identical square made up of vertical lines.”

First documented by Herman von Helmholtz in 1925, he also noted that “ladies’ frocks with horizontal stripes make the figure look taller” which is surprisingly totally counter to what most folks, including fashion gurus, will say today.

You can see the Helmholtz Illusion in action with this simple image:

Still, many folks suggested that the illusion doesn’t carry over from a simple 2D design to the complex 3D design of the human body.

But research from Peter Thompson and Kyriaki Mikellidou suggests otherwise and they produced this image of a differently striped mannequin to prove that the Helmholtz Illusion still works on people:

The mannequins in the images above are the same size but the mannequin with the vertical stipes appears wider to most people compared to the apparently leaner horizontally striped mannequin.

For me, the effect isn’t super pronounced until I look just above the hips. That’s where I can really notice a difference and the horizontal stripes truly make the mannequin on the left look more narrow.

However, as true academics, Thompson and Mikellidou weren’t satisfied with just saying that the effect seemed to be real. Instead, they took things a step further to quantify the difference and found that “the mannequin in horizontal stripes needed to be 10.7% broader to be perceived as identical to the one in vertical stripes.”

Why Is It So Popular To Say Fat Guys Should Avoid Horizontal Stripes?

It’s difficult to pin down a starting point for the prevailing wisdom that fat guys should skip horizontal stripes. However, we do know that the advice was perpetuated by the idea that the eye will somehow follow the stripes in whatever direction they’re going.

That meant a stripe running up and down will make the eye do the same and give the illusion of a taller, leaner person. It’s the sort of thing that sounds just clever enough to be correct…even if it’s not.

But even though it wasn’t correct, my guess is that the power of suggestion was strong enough to keep the idea alive. After enough fashion expert suggested that vertical stripes make you look fat, it just started to feel true!

Is That All There Is To It?

Other researchers have challenged whether the Helmholtz Illusion can so easily be applied to fashion.

Researchers at Kyoto University found that the effect is stronger for a thinner person compared to a fat one, that there was a surprising amount of variability between people with different features, and finally that the order in which people were shown different figures and images made a big difference.

In other words, you can’t just assume that horizontal strips will magically make you look 10% taller or leaner and the many variables of the world will enhance or even completely mitigate the illusion.

And really, that should be no surprise. The real world is pretty different from a controlled experiment.

Does The Size Of The Stripe Matter?

While there hasn’t been as much research that specifically focused on the size of the stripe, it’s absolutely a factor.

It seems that the Helmholtz Illusion is stronger with thinner stripes since the white space between lines can help enhance the effect.

When it comes to big or fat guys, many thin stripes can work well. But if you’re wearing something that has only a few stripes then going bigger is usually better.

We talked about this extensively when we looked at the best suspenders for fat guys and the best tanks tops for big guys. Both of these garments have an element of a vertical striped design- the suspenders are clearly two stripes and depending on the cut of the tank top the portion that goes over the shoulder may look like a stripe.

In these cases, bigger stripes look better since they match a big body.

Imagine a fat guy wearing suspenders that are only a half-inch thick- not a good look.

While that’s moving outside of the Helmholtz Illusion, it’s still relevant to the great stripe debate. The takeaway is that if you’re going for thin strips of any orientation make sure there are a lot of them. Otherwise, go for big stripes that match a big body.

What Should Fat Guys Do With This Information?

We know that the Helmholtz Illusion is real and that the effect can occur on complex figures like the human body.

We also know that the world isn’t so cut and dry so variables like who you’re with, what people have seen before and an endless number of other factors can change the strength of the Helmholtz Illusion.

But, there’s no evidence from any research to suggest that fat guys should avoid horizontal stripes. While they might not completely transform your look, they’re unlikely to make you fatter, shorter, or otherwise less fashionable.

According to the Helmholtz Illusion, vertical stripes may be less appealing for fat guys but considering that there are few fewer vertical stripes on men’s clothing this usually isn’t a problem.

So if you’re a fat guy, you don’t need to stress over stripes and especially not horizontal ones! That means classic menswear like the striped polo shirts are a great choice even for fat guys and we’ve got the science to prove it!

Get out there, wear what you want and live life big!

Looking for the best gun belt for fat, big or heavy guys? We've reviewed our 5 favorites with lengths that will work for almost any fat guy.

Continue Reading
link to Can A Fat Person Be A Personal Trainer?