Skip to content
Written by Camila Reed in Fat Questions last updated July 2021
LiveLifeBig.net may earn a small commission when you use one of the links on this page to purchase. 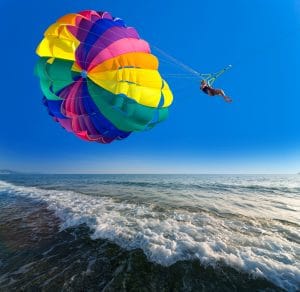 Vacations are supposed to be fun but as a fat traveler, there can sometimes be…complications.

I found this out first hand when I hit the coast this summer with my husband and attempted to parasail. I already knew that as a pair of fat travelers, we were likely to run into some limitations when it came to certain activities but I was surprised to find just how low the weight limit for parasailing really is.

So what’s the weight limit for parasailing?

While it will vary between individual locations, the typical maximum weight for the popular harness-style parasailing is roughly 400 pounds with a minimum weight requirement of 90 pounds. While less common, gondola-style setups can hold more weight and have a max capacity of around 850 pounds.

It’s worth emphasizing that this can vary greatly between different countries, states, rig setups, and individual service providers but these averages and can work as a good guideline.

Let’s take a closer look at everything you need to know about parasailing weight limits.

Is The Weight Limit The Same For Tandem Parasailing?

Yes, the average weight limit of 400 pounds for harness-style parasailing is the same for tandem parasailing too. Heavier folks will usually have to go it alone not only due to weight limits but also to keep the parasailing rig balanced.

If one person weighs significantly more than the other, then it will change the position of the parasail and impact the overall ride. This typically isn’t a problem, but service providers are always going to play it safe and some may be more concerned about this than others.

For the more popular harness-style setup, there’s a minimum weight limit of around 90 pounds. Many service providers will push this number even higher to play it safe.

In general, the higher up you go the windier it becomes and since most parasails go over 200 feet in the air you can certainly expect some wind! Add to that the fact that many coastlines are also windier and you’ve got the perfect combination for quite a bit of turbulence.

If someone weighs 90 pounds or less, they may take a bit of a beating from all that wind and instead of enjoying the scenery they’ll be tossed and knocked around. Not only does that not sound very fun, but it’s also not safe and a risk that service providers will make sure to avoid.

Why Is The Weight Limit Different Between Harness and Gondola Setups?

You may have noticed that there’s a pretty big difference between the overall weight capacity of a gondola-style setup compared to the more common harness setup.

With a harness set up, you’re much more exposed to the wind and any other conditions. Additional, you’re limited by the amount of weight that the hardness can actually support

A gondola, on the other hand, is basically a big flying boat. Not only does this provide extra stability, but it can also support additional weight and these are the preferred option if groups or families want to parasail together.

Do You Have To Be Weighed Before You Can Parasail?

All this talk of weight limits and you might be wondering if you’re going to be weighed before you can even step foot on the boat.

But don’t worry, parasailing companies aren’t going to make you stand on a scale before you can go parasailing but if you look like you’re on the high end or pushing the limits they may ask your weight. You shouldn’t expect them to shout it out across the room but not every service provider will necessarily be discrete about it.

In other cases, you may find asking for a rough weight is part of the signup process and you could be asked to document your weight on a waiver before riding. Again, this can be more likely if you appear to be pushing the upper limits.

Why Can The Weight Limit Vary So Much?

I’ve already mentioned several times that all these weights are just estimates and individual parasailing companies may have different rules.

But why is there so much variation in weight limits?

Let’s look at a few of the factors that can increase or decrease weight limits.

Yep, weight limits can literally change in the wind. Choppier or windier conditions can make parasailing a bit more risky as more wind means more pressure on cables and other gear. According to the folks at Marina Del Rey Parasailing, “Weight requirements change daily due to wind conditions and are subject to Captain’s approval.”

They certainly aren’t the only ones with this policy and that’s just another reason why it’s so important to call ahead to make sure you’re within the weight limits for that particular day.

Parasailing is regulated by the Federal Aviation Administration which means there are certain rules that must be followed, at least in the United States. But beyond that, there are specific state and local laws across the globe that can impact the type of cable used, whether harness or gondolas are allowed, and much more.

These regulations can impact the weight limits directly by adding specific maximums or indirectly by dictating that certain equipment be used.

Even though the risk of parasailing is extremely low relative to similar activities, there’s still certainly a risk that can make insuring parasailing companies difficult. Businesses will often have to make adjustments to weight limits to comply with individual insurance providers. There’s not a lot they can do here and they’re required to play it safe.

In most cases, being fat won’t be a problem as long as you’re within the weight limit set by an individual service provider but as we’ve already seen the weight requirements can sometimes be a moving target.

And that’s the hard part. I’ve heard of weight restrictions as low as 300 pounds in some areas or during some conditions so if you’re a bigger person again it’s a good idea to call ahead.

Besides weight, the only other issue would be if the harness required doesn’t fit.

When you parasail, you sit within a harness that wraps around your legs and forms a seat. You can get a good idea of what that looks like in this video (it’s set to start at the right time):

Depending on how you carry your weight, the harness may not fit appropriately and you may not able able to go.

Besides those two factors, there isn’t any other reason why a fat person wouldn’t be able to parasail. Once you’re suited up and locked in, the parachute does the rest of the work, and all you need to do is sit back and enjoy!

Again, if you’re worried about either being too fat for the weight limits or too big for the harness it’s a very good idea to call ahead so you can save yourself some hassle. You may also want to try a  find a gondola option in the area since they typically have a higher weight limit and don’t have the same restrictions when it comes to the harness.

Will The Rope Snap If I’m Too Heavy?

Again, it’s going to vary some between parasailing service providers but most use a 3/8″ or 7/16″ double braided rope that has a rough break strength of around 6,000 pounds. That’s going to be more than enough to handle your weight.

But in rare cases, parasailing ropes do break…so what’s going on here?

When a parasailing rope breaks, it’s because the force exceeded the rope’s strength limit but it’s not because someone was too fat. There are many more significant variables that will impact the strength rating of the rope such as damage or just too much force from heavy winds. Another potential area of weakness is the point where the rope connects to the actual parasail.

Again, weight does matter here but it’s unlikely that your extra chub is going to be the straw that broke the camel’s back so to speak.

Should I Still Go If I’m Over The Weight Limit?

While your extra weight is unlikely to break the parasailing rope that doesn’t mean you should just ignore the weight limits.

I know, if you’re a little over, or even a lot over, it can be tempting to just parasail anyways.

In short, it’s not worth it. Captains and service providers set the weight limits for a reason and even if they represent an abundance of caution, it’s not for you to decide. Out of respect for the rules and to minimize the risk you should be honest as to whether or not you’re within the limits.

Why Are The Weight Limits So Low?

Well, the answer has to do with liability.

Parasailing can be dangerous and while the vast majority of parasailing sessions go off without a problem accidents can happen and it’s always best to take as many precautions as possible. That includes keeping weights and forces well below the maximum threshold.

Even though 400 might sound like a lot, and it is in some cases, it’s surprisingly low when you consider that parasailing is often done in pairs. It doesn’t take much for two people to hit the 425-pound threshold and that means no more parasailing.

Even with 425 pounds as guidelines, it’s still a good idea to call ahead and make sure that wherever you want to parasail is ready for you.

link to Can A Fat Person Be Flexible?

Can fat people be flexible? They, sure can! So, let's explore the benefits of being flexible, the flexibility activities out there, and where to start?

Looking for the best khakis for fat guys, big dudes, and muscular thighs? We've reviewed our 7 favorite khakis with options for every situation.