Skip to content
Written by Camila Reed in Fat Questions last updated May 2021
LiveLifeBig.net may earn a small commission when you use one of the links on this page to purchase. 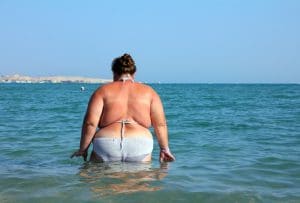 You might assume that fat people would sink in water, right?

After all, fat people do typically weigh more and heavier things sink. But fat folks are actually excellent at floating!

So why do fat people seem to float so well? It has to do with density. Fat is actually less dense than water which means it floats. If you add oil to a pot of water, you’ll see it floating on top and it’s the same idea when a fat person gets in the water. Muscle is denser than water and so it sinks.

Let’s take a closer look at what’s going on here and what it means for fat folks.

What Determines Who Floats…And Who Doesn’t?

The physics behind floating in water is a lot more complex than just weight. Instead, it all comes down to density and displacement.

Don’t be intimated by scientific jargon like specific gravity! We’re going to keep this as simple as possible but we do need to dive into a little science to explain why fat folks are more likely to float.

The first concept we need to understand is density.

Density describes the mass per unit of volume for a particular substance or in simple terms how tightly “packed” something is. You can also think of density as a way of measuring how heavy something is compared to its overall size.

For a good example of this, consider two balls of the same size. One is hollow and made from plastic and another made of lead. You know, without even thinking, that the hollow plastic ball will not only weigh less but will also float on water while the lead ball will sink. The balls are the same size but their main difference comes down to density.

The Density of Fat vs Muscle

So what does all this have to do with fat people floating?

By understanding the density of fat, muscle, and water we can fully understand why some folks float and others don’t!

This also explains why people with a lot of muscle tissue weigh more than you’d expect just by looking at them. All that muscle is dense (and heavy)! Too heavy to float in water!

This video has a great little experiment that illustrates how the density of a liquid can interact with a solid and will help you understand these ideas:

What About Other Tissues?

Of course there’s a lot more to people than just fat and muscle. We’ve also got bones, organs and a wide range of other tissue types all with different densities.

While it can vary with age and nutrition, bones typically have a density of 1.39 g/cm3which means they’ll most definitely sink in water. Blood has a denstiy nearly the same as water which means it could go either way.

Then there’s the fact that roughly 60% of your entire body is water already, which certainly helps anyone float!

Density is one of the biggest factors that determines which people float and which don’t but there’s also the issue of displacement and bouyancy.

What’s About Density and Buoyancy?

When you get into a bathtub, what happens?

Well, if you’re me then most of the water spills out because there just isn’t enough room for me and the water. That’s called displacement and it’s what happens when anyone enters any body of water but it’s most noticeable in something smaller like a bathtub. If you’re bigger, like me, then you’re displacing even more water.

But it doesn’t end there.

When you enter the bathtub and displace water, you’re also going to experience an upward force from the water. That force is called buoyancy and it’s a word you’ve probably heard before.

That force of the water depends on the amount of water displaced and you can see a great example of this here. Fat people will often displace more water which means they create a greater buoyancy force that helps them float.

Total Body Composition Is What Matters

With all the different tissues that make up your body and their different densities, it should be clear that the total composition of a body is what determines if you’re more likely to float or not.

For example, a person with a ton of muscle would typically sink but if that muscle is covered with fat, enough to change their average density, then they could float!

Of course, there are even more variables to consider like the temperature of the water, whether it’s salt or freshwater, and what you’re doing to try and increase your buoyancy.

People (Including Fat Ones) Float Better In Cold Water

The idea of water increasing in density as it gets colder makes sense at a molecular level but it also checks out when you consider what happens to water when it gets really cold…you know, like ice! Ice is obviously more dense than water, which is also why ice cubes float in liquids.

The opposite is also true and warmer water is less loosely packed and so it’s got less density.

In most cases, you won’t notice much of a difference unless you’re dealing with some rather extreme temperatures.

Saltwater is denser than fresh water and as result, everyone, including fat folks, is more likely to float in it. If your body composition is average or even a little muscular, you might find that you sink in freshwater but float a little better in the ocean.

That’s because salt water has a density of around 1.02 g/cm3 to 1.03 g/cm3 which makes it just a little denser than your standard water.

But then there are more extreme examples like the Dead Sea which has a density of 1.24 g/cm3!

But just how big a difference is that compared to the density of other water?

Check out this bowling ball, along with a handful of pins, floating in the Dead Sea to really see the power of density!

Chlorine is denser than water with a density of 1.56 g/cm3 however there’s a minimal amount of chlorine in the water so the impact on the overall density is pretty minimal. As a result, you’re not likely to notice much of a difference, if any, compared to fresh water and the pool.

Remember, it’s your overall density that impacts whether or not you float. While fat people are going be less dense compared to the amount of water they displace, there are some things that anyone can do to improve their ability to float.

One of the easiest methods is to take in a big breath of air and hold it to increase your buoyancy. If you’re especially skilled at floating you can actually continuously hold a little air in your lungs to keep your buoyancy up while still circulating enough air to breathe.

Floating alone doesn’t make a person great at swimming so it will take more than just some extra adipose tissue to win a gold medal. The best swimmers are usually tall, long and lean. Not only does this give them less weight to move around but it also means that they’ve usually got large hands and feet that act as more powerful paddles.

Of course, you also need to have the atheltic ability to actually power your muscles, too!

But the ability to float does give fat people a small advantage compared to someone who is heavily muscled.

There’s also a chance that the power to float may help women compete with men when it comes to swimming! In general, the average woman has a higer body fat percentage when compared to a man which makes them better floaters. The Register points out that despite bouyancy only being one of several factors, ” compared with other competitive sports, the performance of women is closer to that of men in competitive swimming.” It could be that extra buoyancy that helps close the gap!

Even if floating doesn’t make you a better swimmer overall, the ability for fat people to float can be helpful for other water sports like surfing.

Yep, us fat folks float better in water of all types! It’s a result of not only a lower overall density but also an increased surface area that produce increase bouyancy.

While it might not make fat people superior swimmers, simply because there are many other things that impact the ability to swim, it can help us hang out in the water and enjoy some rays a little easier!