Skip to content
Written by Camila Reed in Fat Questions last updated April 2021
LiveLifeBig.net may earn a small commission when you use one of the links on this page to purchase. 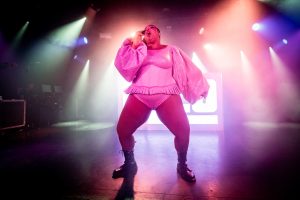 Table of Contents show
Does It Matter If You’re A Man Or A Woman?
Turns Out, People With Long Necks Sing Better
Still, Don’t Put On Weight Just For Your Musical Career
What Will Happen To My Voice If I Lose Weight?
Does This Explain Why Opera Singers Are Always Fat?
If You’ve Got It…Flaunt It!
Conclusion

What do Luciano Pavarotti and Lizzo have in common?

At first glance, not much.

One was a classical Italian opera singer and the other is a female rapper from Texas. Pavarotti generally wore tuxedos while Lizzo generally wears, well, less.

Besides being international superstars, they’re both fat. Yep, I said it. They are BIG. Don’t get me wrong, they certainly have more to them than just their weight, but they command the stage with their voices and their size.

Their excess weight is something that makes them unique in the celebrity world. Unlike other stars who are often superficial and unattainably thin, fat singers look like us. They make us feel comfortable and accepted as they forge a path for us to follow.

And in many cases, vocalists who carry around some extra weight actually perform better on stage.

Heavy people have bigger (and better) singing voices than their competition. But why? Many fat people are better at singing because of their unique hormone balance, optimized body structure, and confidence. Just being fat alone won’t make you a great singer, but it can help in some cases.

Does It Matter If You’re A Man Or A Woman?

Your gender won’t impact whether or not you’re a good singer, but it will affect how your singing sounds.

Heavy men’s and women’s voices are positively affected by their hormones. The presence (or absence) of testosterone will affect how deep the singer’s voice sounds.

This is where pitch comes in. Pitch is the high or low frequency of the sound you make. When you sing, your vocal chords vibrate at different speeds which results in a different pitch. Basically, the fewer the vibrations per second, the lower the sound will be.

Taller people tend to have longer fingers and bigger hands. Similarly, bigger people usually have longer and thicker necks that house more powerful vocal chords. A fat person might also have a longer larynx, which encases the vocal chords. Take Aretha Franklin, for example, she had a chubby neck and an astounding singing voice.

Aretha’s thick neck gave her more control of her vocal chords, which resulted in her unique sound. She was able to dictate the pitch (and therefore, frequency) of her voice with muscle strength. This talent prevented injury to her vocal chords and contributed to her long career.

Still, Don’t Put On Weight Just For Your Musical Career

Your goal should always be overall health. You want to be the best version of yourself! We come in all different shapes and sizes. I wouldn’t suggest packing on the pounds just to improve your singing.

Instead, focus on the weight that makes sense for you and your body rather than the societal or singing benefits.

If you are already a talented singer, then putting on additional weight likely won’t make you that much better. And if you’re not a great singer to begin with, well, then there really isn’t much hope for you anyway.

Now, if you put on weight for some other reason and a better voice is a byproduct of that, then ok. But don’t start gaining weight for the sole purpose of winning a karaoke contest!

What Will Happen To My Voice If I Lose Weight?

If you shed some pounds, don’t fret. Your talent will not disappear! Need proof? Look no further than the 15-time Grammy winner, Adele. The superstar shocked fans when she lost over 100 pounds.

Adele may be lean now, but she is still kicking butt and has a phenomenal voice. In fact, she is working on a new album. This will be her first album as a “skinny” vocalist. Although it has not been released yet, if we know Adele (and we do!), her music will be just as good as it was when she was fat.

Does This Explain Why Opera Singers Are Always Fat?

I know we have all seen the typical opera singer – double chin, round and a booming voice. Where do you think the phrase “It’s not over until the fat lady sings,” comes from? It originated from that exact stereotype!

However, opera singers don’t have to be fat. One reason they tend to be on the heavy side may not even have to do with their weight. It actually might be the size of their rib cage. When your bones are larger, you have more space to expand your lung capacity. You can take in more air, which results in a stronger singing voice. If you’re fat and “big boned,” this is great news for you!

There is another theory as to why opera singers are on the heavy side. Their performances can go on for hours. That means using lots of energy and no snacking on stage. In order to keep up that stamina, their bodies need to be fueled and have some energy stored up for later. Their extra fat sources keep their endurance up.

If You’ve Got It…Flaunt It!

Fat people just perform better. Since society is always badgering us about ways to “improve” ourselves and calling us “brave” for just being the way we are, we have to show off somehow!

As fat people, we command the stage. We do it because we CAN! You can’t help but look at us because we attract attention. And you know what?

Be proud of who you are. There’s just more of you to love. As Mika said, big girl (or boy) you are beautiful.

Fat people really do sing better than everybody else. The physical part is obvious, but what can be even more impactful is the way we carry ourselves.

So go ahead and live life big! Grab that mic and sing your hearts out – you’re good at it and the world needs to know!