Skip to content
Written by Camila Reed in Fat Questions last updated March 2022
LiveLifeBig.net may earn a small commission when you use one of the links on this page to purchase. 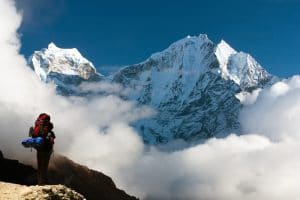 As a fat-positive person of size, I’m in full support of fat folks doing anything and everything.

Simply put, because I think they can. But what about mountains…

Yes, it’s entirely possible for fat people to climb most mountains, including some of the more difficult ones. However, regardless of your body weight, you should make sure you have enough cardiovascular fitness to reach the top. Hiking and climbing mountains that are beyond your ability can be dangerous to you and others.

We’re going to explore what disadvantages, or even benefits, fat folks may have when it comes to climbing and hiking mountains but first let’s make one important distinction.

I spent quite a bit of time in Colorado and when I first started asking about hiking 14’ers I got pretty confused about the terminology used.

I was asking about hiking to the top of a 14’er but many folks kept referring to what they were doing as climbing. But when I thought of climbing I imagined piles of rope, chalk, helmets and all kinds of other equipment!

So here’s the thing, many folks use the word “climbing” to describe reaching the peak of a mountain despite it essentially being a hike to the top. There’s usually a trail and there’s no scaling of rock our mountaineering required. Many folks would consider this just to be a hike but plenty of folks will refer to it as climbing too.

I’ll try to keep the distinction clear in this article but I’ll make it especially clear when I’m talking about actually using rope to scale a rock wall!

Do Fat People Have Enough Cardiovascular Fitness To Climb A Mountain?

What’s the biggest objection or concern that most people would have when it comes to fat folks climbing?

It’s probably that fat people just wouldn’t be fit enough. Mountain climbing isn’t easy for anyone and it takes a lot of cardiovascular fitness to reach the peak of even the smallest mountains.

Fat folks aren’t exactly well known for supreme cardiovascular fitness and in most cases, being fat can be connected to a variety of cardiovascular issues. But that doesn’t mean it’s a 100 percent consistent connection and those studies often fail to include members of the active fat community.

While the idea of an active fat person might sound like an oxymoron, it’s anything but and there are plenty of folks who are living it up with a variety of outdoor activities, including climbing mountains.

That’s because it’s not just bodyweight that makes someone a good or bad runner. According to Runner’s World, “It’s possible for a heavier runner to be faster than a thinner runner if the heavier runner has the necessary ingredients for better endurance: higher VO2 max, higher lactate threshold, and better running economy. Genes play a huge role as well, as does experience.”

These are all cardiovascular or even general fitness factors that can be improved upon without losing bodyweight.

That doesn’t mean losing weight won’t put you at an advantage and in most cases, skinny folks will be a little faster. However, mountain climbing isn’t a race and a well-trained fat person can certainly reach the top of just about any peak.

How To Hike And Climb A Moutain As A Fat Person?

One step at a time, that’s how!

But seriously, as a fat activist and an active fat person (say that 10 times fast), I’ve learned a few tricks over the years for making it to the top of any peak.

Of course, some of the tips are applicable for anyone and not just fat folks.

Don’t Be Afraid, But Don’t Over Do It

Don’t let being heavy or fat stand in your way but at the same time, you don’t want to put yourself in a dangerous spot. Unlike a treadmill or a walk around the neighborhood where you can easily get home when you’re ready, there’s only one way up or down a mountain.

You don’t want to find yourself stuck, exhausted, and halfway to the peak so take a few practice runs before you fully commit to a climb. Consider doing some hikes around the base of the mountain or even part of the way up before you commit to reaching the summit. There’s nothing wrong with a little practice to not only build up cardiovascular fitness but also confidence.

Get Ahead of Chafing

Fat folks know that chafing is a constant problem and there’s no better way to ruin an outdoor activity than uncomfortable chafing. So make sure you’ve got clothing that’s breathable but not so loose that you’re going have everything rubbing against itself.

I swear by Gold Bond’s friction defense stick and I take one of these with me everywhere. Whatever works for you, make sure you’ve got a plan to manage chafing before it starts to hurt because by that point it’s already too late!

You can also try stashing some of your items in a plus size running belt instead of using a backpack. Not only will that get you to carry less but it will also better distribute your weight.

Pick Up Some Hiking Poles

Hiking poles are an absolute lifesaver when it comes to hiking or climbing up a mountain. They’re especially useful for fat folks but my favorite pair from TrailBuddy has more than 24,000 five-star reviews on Amazon which tells me they’re being used by all types of people.

But what do hiking poles do?

They allow you to more evenly distribute your weight across your entire body. Without the poles, all your weight and pressure is on your legs and back. But with poles, you can put your arms and upper body into the mix to balance out some pressure.  It also gives you a more balanced and whole-body workout.

Finally, poles can give you the ability to effectively rest on the go. Instead of having to take a seat on the ground or a rock, you can lean hard into your hiking poles as a sort of active rest. This saves you the hassle of having to sit and stand but still gives you a chance to recover.

Don’t worry about being too fat for hiking poles, if you’re able to walk up the mountain then those TrailBuddy sticks can support your weight.

Are There Advantages To Being A Fat Mountain Climber or Hiker?

You’re not going to hear many folks talk about the benefits of being fat but they are out there. Especially when it comes to water-based sports where the ability for fat folks to float can actually be an advantage. However, when it comes to hiking, the plus side is pretty limited.

The biggest benefit is going to be extra protection against falls, bumps, and bruises. Your extra cushion acts as a deeper protective layer and while too much weight can cause other walking issues it will still protect if you fall.

Are There Any Famous Fat Mountain Climbers?

My absolute favorite is the beautiful Kara Richardson Whitely who hiked Kilimanjaro at over 300 pounds. Hiking Kilimajaro is difficult for hikers and climbers of any skill level and it’s the 4th largest peak in the entire world.

And Kara climbed it not once, but THREE times!

If you’re looking for some inspiration, she even wrote a book about her experience which you can see on Amazon and it’s a must-read for any aspiring plus-sized hiker or climber.

When it comes to more technical climbing, it’s harder to find truly fat climbers but there are plenty of heavy men who were also exceptional climbers and you can read more about them here.

Could A Fat Person Climb Everest?

Skeptical people may try to take the argument of fat people climbing to the extreme and ask if fat folks could climb something as challenging and difficult as the tallest mountain in the world.

While it’s technically possible for a fat person to climb Mount Everest, and it’s certainly been done, it makes the climb more difficult. Every single gram of weight matters when you’re talking about the toughest mountain in the world and it requires extreme conditioning to pull off.

While it might be a bit of a silly comparison I think of it like sumo wrestling.

Can you be skinny and sumo wrestle?

Absolutely. But if you want to compete against the best in the world you better be ready to put on some weight. In other words, hiking and climbing mountains is entirely doable by a fat person but when you start talking about the top 1% of difficulty you’ll need to train for a very specific type of body.

There you have it!

Fat folks can not only hike and climb mountains but plenty of them have done it! Like surfing some of the biggest waves on the planet or enjoying nature via horseback, climbing is just another activity that society incorrectly says fat folks can’t do!

Even some of the toughest, tallest peaks in the world are no match for a fat person with the right attitude! That doesn’t mean you should jump off the couch and book a ticket to climb Mt. Kilimanjaro tomorrow.

But it does mean that there’s nothing stopping from reaching the top of that mountain…or any other.

In other words, there’s no reason to not get out there and live life big!