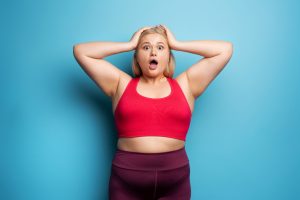 A buffalo hump is a pretty common occurrence, particularly because contributing factors like being overweight and poor posture affect a large percentage of the population. Not to be confused with a dowager’s hump, the buffalo hump is a fat deposit that appears as a lump between your shoulders.

While a buffalo hump generally isn’t dangerous, some people want to get rid of it because they just don’t like having it on their bodies. So is there something that can be done about it?

And more importantly, if I lose weight will my buffalo hump go away?

In most cases, losing weight through diet and exercise are not going to get rid of your buffalo hump completely- but they can help. Losing weight helps with the appearance of a buffalo hump a little, but often, corrective surgery is needed to remove the fat deposit because it gets hardened with time.

Below, we’ll talk a little more about what a buffalo hump is, what causes it, and what your alternatives are for getting rid of that hump so you can feel more confident again.

What is a Buffalo Hump?

The scientific term for buffalo hump is dorsocervical fat pad. Basically, a buffalo hump is that area between your shoulders and below your neck. It can be made worse by poor posture, but it’s made up of fat that has been stored in the area by the body.

While a buffalo hump generally isn’t dangerous, the size of it might affect how confident you feel in certain clothing, particularly a strapless dress or open-back shirt where your upper back is exposed.

Knowing the difference between buffalo hump and dowager hump helps with deciding on a course of treatment. For example, a brace might be used to correct a dowager’s hump, while weight management or cosmetic surgery like liposuction are common treatments for buffalo hump.

If I Lose Weight Will My Buffalo Hump Go Away?

There is a chance that losing weight could reduce your buffalo hump, or even make it go away completely. That being said, buffalo humps aren’t caused just by carrying around extra weight.

The reason that not every overweight person has a buffalo hump is that fat more commonly accumulates in areas like your stomach, thighs, hips, buttocks, and arms. Having a buffalo hump means that your body isn’t storing fat in these common areas and it has instead stored fat in your upper back and neck area.

If you’ve had a buffalo hump for a long time, there is also a good chance that the fat deposit has hardened. Once it’s hardened, it’s going to be very hard to make it go away using diet and exercise. That being said, there are other options that we’ll talk about later.

What Causes a Buffalo Hump?

Buffalo hump can be caused by several things. Some common causes include Cushing’s syndrome, being overweight, genetic predisposition, and taking corticosteroids. Less common causes of buffalo hump include Madelung’s disease and certain tumors.

Cushing’s syndrome is one of the reasons that a person may become obese, particularly if they don’t know they are dealing with it. There is also a lot of overlap between Cushing’s syndrome and effects of obesity.

Cushing’s syndrome develops over time, as a result of having too much cortisol in your bloodstream. In addition to weight gain, Cushing’s syndrome is known for causing fat deposits on the upper back, between the shoulders, and in the face.

Since Cushing’s syndrome can lead to severe conditions like bone loss, high blood pressure, and type 2 diabetes, it’s best to start treatment if this is causing your buffalo hump. In some cases, regulating cortisol levels will help reduce your buffalo hump, too.

Can Being Overweight Cause a Buffalo Hump?

Being overweight does increase your risk of a buffalo hump, but it’s not always the sole cause. In cases where people have all over weight gain, buffalo hump can be common. However, the way that your body stores fat plays a big role too, not just being overweight alone.

Since these are used to target inflammation and treat pain and chronic conditions, you’ll want to talk to your doctor if you want to reduce your buffalo hump. They may be able to provide alternatives or at the very least, will wean you off the glucocorticoids safely.

In addition to glucocorticoid use, people taking inhibitors to treat HIV/AIDS may develop buffalo hump over time. This is another situation where you’ll want to talk to your doctor about options, particularly because of the severity of the disease when it isn’t being treated.

Madelung’s disease is a metabolic disease that causes fat deposits to grow in different areas of the body. It’s most commonly caused by alcohol abuse and may be accompanied by other health concerns including diabetes, hypothyroidism, anemia, and cirrhosis.

Does Poor Posture Cause Buffalo Hump?

Poor posture on its own does not cause buffalo hump. In people who have weak bones (such as those with osteoporosis), a dowager’s hump might develop in this area from poor posture. Slouching forward causes the bones to settle and the result is a hump.

That being said, having poor posture can make buffalo hump worse if you do have a fatty deposit in that area.

Can I Reduce Buffalo Hump?

Yes, there are ways to reduce buffalo hump. A good place to start is talking to your doctor. After all, it’s helpful to know whether you’re dealing with a buffalo hump or a dowager’s hump before deciding the best course of treatment.

What’s the Best Way to Get Rid of a Buffalo Hump if You’re Overweight?

For individuals who are overweight, the best first step in reducing a buffalo hump is making lifestyle changes. Changing your diet and increasing physical activity are helpful, particularly if you are doing exercises that work out the upper body and back. Low-impact exercises like water aerobics and swimming are good choices.

Not only does exercising have the potential to help reduce the size of your buffalo hump, but it also helps build muscle. This could be especially helpful for people who have Cushing’s syndrome, which causes bone and muscle loss over time.

In addition to lifestyle changes, you should talk to your doctor about your concerns. A physician will ask about any medications you are taking and perform tests like measuring your cortisol levels, which can help confirm the reason for your buffalo hump. Then, they can help you with a course of treatment.

What About Surgery for Buffalo Humps?

Having any type of surgery, even cosmetic, is a big decision. Of course, knowing the cause of your buffalo hump helps determine whether or not surgery is an option.

Surgery to remove a buffalo hump usually involves making a small incision and removing the fat deposits in the area, a process known as liposuction. Liposuction is a fairly common procedure and people use it in different areas of their bodies, too.

Insurance doesn’t always cover surgery for buffalo humps, especially because it’s sometimes considered a voluntary, “non-necessary” procedure. The exception to this rule is cases where buffalo hump is so severe that a person’s posture is affected, or when they are experiencing severe pain from the weight of the extra fat deposit.

If you feel that surgery is the best option for treating your buffalo hump, then go for it! Whether it’s deemed necessary or not, you should feel comfortable having something done that’s going to make you feel better in the long run. This includes feeling better physically, as well as feeling better when it comes to your self-esteem and confidence.

Can a Chiropractor Reduce Buffalo Hump?

To answer the question of, “If I lose weight will my buffalo hump go away?”, the answer is that it can help, but that also depends on the cause of your buffalo hump.

Sometimes, buffalo hump is caused by underlying problems like Cushing’s disease or excess cortisol from a tumor. Taking certain medications can also cause buffalo hump, while poor posture makes the situation worse.

Your doctor will best be able to advise you on a course of treatment, particularly because sometimes changing/reducing medication is the best solution and other times, they’ll recommend lifestyle changes or cosmetic surgery.

Do black men prefer big white women? While this is a stereotype, there is a truth to it because of cultural acceptance of body types. Keep reading!

Continue Reading
link to Chubby Vs Fat: What's the Difference? (With Pictures)

What's the difference between chubby vs fat? Find out why chubby people are regarded as a little overweight, while fat is associated with obesity!