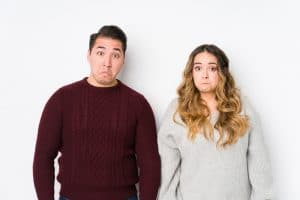 Sizing is supposed to be simple but if you’re big, tall, plus sized, or any combination of them then you know it’s anything but simple.

It’s like you have to learn an entirely new vocabulary between tall, big, plus size, misses sizing, and a whole lot more. And if that wasn’t enough, there is even more confusion about what would seem to be simple distinctions like 1XL vs XL, 2XL vs XXL, and so on. Heck, some brands have even introduced a 0XL size!

What’s going here? Is XL the same as 1XL or is it something else?

Whether we’re talking about clothing for men or women, XL and 1XL are not the same sizes. The XL size either refers to traditional sizing for men or misses sizes for women while 1XL sizes refer to big sizes for men and plus size cuts for women.

So while these sizes appear equivalent, they’re really referring to two different sizing scales which is why they end up describing different sizes.

Let’s take a deep dive into everything you need to know about these two sizes along with other confusing but similar sizes like 2XL vs XXL, 3XL vs XXXL, and so on.

What’s The Difference Between 1XL And XL In Women’s Clothing?

Sizes like L, XL, and XXL refer to misses sizing which is the standard sizing you’ll find off the rack at most department stores. On the other hand, sizes like 1X, 2X and 3X refer to plus size options which are larger overall but especially in the bust, hips, and waist.

Of course, garments for your bottom half like pants and capris will use more traditional digit-based sizing. but upper half garments like shirts and jackets will use variations on XL and 1XL.

You might be surprised to see that the 1XL, which uses the plus sized scale, is actually smaller than the XL from the shirt that uses standard sizing. Again, these are from the same Amazon brand of shirts!

Of course, waist and bust aren’t the only measurements that matter, and plus size cuts can add extra room in a variety of areas. But it does show why you should always check the sizing charts for the individual brands you’re interested in and don’t rely only on the XL or 1XL designation.

Which Is Bigger…2XL or XL?

While it will depend on the indvidual brand in some cases, 2XL will be larger than XL the majority of the time. To see how different these sizes can be, let’s take another look at those same two Amazon women’s shirts with one using misses sizing and the other using the plus size scale:

We can see that the 2XL from the plus size system is larger, but maybe not by as much as you’d expect compared to the XL from misses sizing.

What Size Is 1XL Equivalent To?

What if you usually wear 1XL but you’re interested in a garment that doesn’t offer plus size options? What is the misses equivalent to the 1XL size?

It will depend on the individual brand so it’s best to refer to the size chart for the specific garment but in most cases, 1XL is loosely equivalent to an XL. Surprisingly, the XL in the misses cut may actually be bigger in some cases- at least in some parts of the garment.

You can refer to the chart in the first section for a specific comparison between XL and 1XL in a women’s shirt and get an even better idea of what this may look like.

Some plus size brands have added in a 0XL that can make things even more confusing.

At first glance, it might seem like 0XL should be equal to an XL but that’s not exactly what’s going on here.

Instead, 0XL is usually smaller than both 1XL and XL sizes. 0XL and 1XL are both using the plus size scale while XL is a misses size. So even though all three of these may sound roughly equivalent, they are in fact all different sizes.

This can get confusing but as long as you remember that sizes with a number in front of them are using the plus size scale it’s much easier to avoid getting confused- even when you’re dealing with strange sizes like 0XL.

Most plus size brands don’t actually use the 0XL measurement and it’s primarily something I’ve seen from Shein and only a handful of other brands.

What’s The Difference Between 1XL And XL In Men’s Clothing?

If you’re applying your middle school math skills to these two sizes you’d come to the conclusion that they’re the same thing.

But unfortunately, the distinction between 1XL and XL is not always so cut and dry.

That’s because some big and tall brands will still use the XL sizing and it’s simply understood that it’s a big and tall size. The differences between 1XL and XL are more pronounced in women’s garments but guys don’t have it so easy (in this case).

How big of a difference is this really?

Let’s check out this simple chart to compare the standard XL shirt sizes to a t-shirt from the big and tall brand KingSize. Keep in mind that both shirts are labeled as XL but are actually different sizes.

While other big and tall brands may refer to this as a 1XL, some will just call it an XL and let you figure out that it’s a big and tall size.

What’s The Difference Between XXL and 2XL?

Just as we saw with XL vs 1XL, the difference between XXL and 2XL is that XXL refers to traditional sizing while 2XL is part of the plus sized or big and tall sizing system. However, just because 2XL is based on a different scale doesn’t mean it’s always bigger!

I’m not sure who originally had the idea to introduce similar but still very different size systems for the same clothing.

Or who decided to take things to the next level by introducing an extra confusing size of 0XL.

But once you get the hang of the misses vs plus size scale things get easier to understand even if translating between the two is still plenty confusing.

What do you think? Did you find everything you were looking for?

Looking for the best plus sized women's dress pants? We've reviewed 6 of our favorite dress pants for every curvy woman and every occasion!

Are you looking for the perfect plus size elbow sleeve top? Here you'll find my top elbow sleeve blouses for big girls, suitable for different occasions!