Skip to content
Written by Camila Reed in Fat Questions last updated August 2021
LiveLifeBig.net may earn a small commission when you use one of the links on this page to purchase. 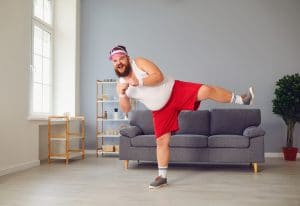 As I’ve gotten bigger and fatter over the years I’ve noticed quite a few changes.

Sure, some of my clothes fit a bit tighter and the way I walk around may have even shifted a little but what about changes that are harder to see?

You know, physiological changes that aren’t so easily measured. At least not as easy to measure as tighter pants.

For example, do fat people have more blood than thin people?

If you want to learn more then keep reading and we’ll cover everything you need to know!

How Is Blood In The Body Measured?

The explanation for why fat folks may have more blood than thinner people might make sense, but it can also seem hard to verify.

After all, how can you measure the amount of blood in the body?

While are there are multiple ways to complete a blood volume test (that’s the official name for a test that measures the amount of blood in a human body) one of the more common options involves injecting a small amount of a radioactive isotope into the blood. This isotope is harmless and can be tracked throughout the body as it moves in the blood. From there, medical professionals can calculate the total blood volume.

This process can take several hours to complete since it requires giving the body enough time to circulate blood.

There’s also a much faster method that’s gaining in popularity which compares the amount of hemoglobin in a small blood sample to the amount of carbon monoxide exhaled.

But to answer our question, we don’t need to get into the nitty-gritty of the science, and instead, we just need to know that blood volume, or the amount of blood in the human body, is pretty well understood.

But even if it wasn’t, we could still prove that obese, fat, or heavy folks will have more blood in than others just by considering the basic anatomy of cells!

Why Do Fat People Have More Blood?

But blood isn’t just about nutrients, it also helps move waste like carbon dioxide to the lungs where it can be exhaled.

In other words, an active blood supply is an absolute requirement for any living tissue.

Still, fat tissue doesn’t have quite the same demands as something like muscle tissue since its primary purpose is just to store energy. Besides helping you float in water and providing a little extra cushion if you fall on a hike, fat doesn’t have a lot of responsibility- at least from a cellular perspective.

But that doesn’t exclude it from needing a steady supply of blood!

As a person develops more fat tissue the body also needs to produce more blood vessels to support this tissue. Of course, blood vessels need blood and the body will also send signals that trigger bone marrow to produce stem cells which will eventually turn into blood.

Simply put, more tissue requires more blood to support it which means fat folks will have more blood than people with less tissue.

However, it isn’t exactly that simple in every case. Because fat doesn’t have the same cellular demands as something like a muscle it has relatively low blood supply requirements so its overall impact on blood volume can be a little hard to pin down.

How Much More Blood Do Fat People Have?

Just how much more blood fat people will have depends on several factors.

For starters, fat is a broad term that describes a huge range of body types and on its own isn’t enough to determine the total blood volume for a person. Instead, we would need to consider the bigger picture of the types of tissues someone has.

As a starting point, the American Red Cross explains that “a 150-180 lb. adult will have approximately 1.2-1.5 gallons (or 10 units) of blood in their body” but you won’t find many sources that confidently connect the amount of blood to bodyweight beyond a rough estimate.

However, you can get close using the rough estimate that blood accounts for around 10% of an adult’s body weight. Again, this is a rough estimate but it would give a general idea of just how much more blood a fat person has compared to someone else.

Because fat tissue is primarily used to store energy, it doesn’t require as much blood to stay healthy when compared to muscle tissue which is constantly in need of oxygen and other nutrients.

As a result, fat tissue doesn’t require as much blood supply as muscle tissue.

This distinction is a big reason why it’s difficult to really estimate blood volume just based on body weight alone. The New York Times explains this further:

That means a huge bodybuilder weighing 350 pounds and a fat guy who weighs 350 pounds will have very different blood volumes. So while it’s easy to draw conclusions from these extremes, it becomes very difficult to estimate blood volume in the real world where most people have a healthy mix of fat and muscle.

Do Taller People Have More Blood?

Because all cells need a steady blood supply to stay healthy, the blood volume of any person is directly proportionate to their body weight. It doesn’t matter if a person is heavier as a result of being tall, fat, or muscular they’ll still need more blood supply and so taller or larger people will have more blood.

Still, that doesn’t mean a tall person has more blood than any other person since it will still depend on the overall weight and type of tissue.

If fat people have more blood than smaller, thinner people does that mean they can safely donate more blood?

While fat people may have more blood than thin people, it’s still not enough to justify a significant increase in the amount of blood donated. While more fat often leads to more overall blood supply, because fat doesn’t require much blood the difference isn’t enough to safely allow fat people to donate more blood.

Donating blood can be a complicated process and rather than just considering the amount of blood volume a person has medical professionals need to consider a huge range of criteria ranging from where you’ve traveled, when you’ve last had a tattoo, and of course overall health.

Being fat or not is just one of several risk factors.

But donating blood isn’t just about risk and some studies have found that donating blood can have a positive impact on blood pressure when it comes to obese folks suffering from metabolic syndrome!

Yes! Blood saves lives every day and being fat shouldn’t stop you from supporting the cause!

Being fat shouldn’t matter and instead, it’s your overall health that matters.

However, make sure that wherever you choose to donate blood can support you. I’ve unfortunately had to turn around when I realize that the blood donation center I wanted to visit was just a converted RV which just doesn’t have enough room to comfortably seat me and the medical staff.

I understand the benefit of having a mobile blood donation center, but people of size like myself just aren’t going to fit in that kind of space. As with most things, it’s usually a good idea to call ahead and make sure that the facility you’re considering can accommodate you.

If they can’t, don’t let it bother you! Just move on to the next one!

I promise you that you’ll find a facility that will be extremely grateful for your blood donation regardless of your size.

Turns out, fat people do have more blood than other folks…at least most of the time!

But because fat tissue doesn’t require that much of a blood supply to stay healthy, it might not be as much you’d think at first. Instead, it’s people with a lot of muscle that end up with more blood volume than everyone else!

Still, those are just generalizations and when it comes to regular people with a mix of fat and muscle it can be hard (or even impossible) to just “eyeball” it and figure out who has more or less blood.

What do you think? Did you learn something new?

Looking for the best gun belt for fat, big or heavy guys? We've reviewed our 5 favorites with lengths that will work for almost any fat guy.

Continue Reading
link to Can A Fat Person Be A Personal Trainer?