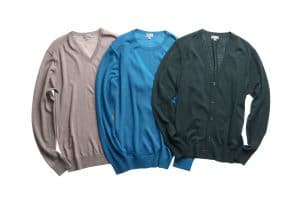 When it comes to fashion for big guys, things can get very confusing…very quickly.

For starters, there’s a whole heck of a lot of people who aren’t big making up the rules for us. These folks don’t have any skin in the game and seem to be more about limiting big guys instead of making us look good!

So let’s change that today by tackling one of the more controversial garment topics out there: v-necks.

Can big guys and fat dudes pull off this look? Should big guys wear a v-neck?

Big guys can absolutely look great in v-neck t-shirts, polo shirts, cardigans, and other v-neck garments. Similar to a pointed collar, a v-neck can elongate the face which is great for bigger, rounder faces. However, bigger guys will need to be more careful with how deep the v-neck goes to avoid a more effeminate look.

Let’s look a little closer at what you need to consider before grabbing that v-neck shirt along with why some big guys pull off this look and others seem to struggle.

Table of Contents show
What’s The Ideal V-Neck Length For Big Guys?
Why Big Guys Should Wear A V-Neck
V-Necks Elongate Your Features
It’s Okay To Show Off A Little Chest Hair
To Add Some Variety To Your Wardrobe
How To Pull Off The V-Neck
Understand What You’re Wearing
Avoid Super Short Sleeves
Know When To Layer
Watch the Chest Hair
Double Down With A Beard
Closing Thoughts

We’re going to talk a lot about how big guys and fat dudes can pull off the v-neck look but by far the biggest factor is simply how deep of a v-neck do you go for?

It’s easy to know when a v-neck is too deep and if that doesn’t strike you as immediately true, check out this awesome SNL skit about the battle of the deep v-necks.

Jokes aside, most big guys should keep v-necks no deeper than 3 inches (7.5cm). Said another way, v-necks shouldn’t go deeper than the very top of your armpit.

You can pull off a deeper v-neck but it’s a little hard to do and the 3 inch/armpit rule is a good starting point for most big dudes.

So what’s the risk of going too deep?

Most often, going too deep can end up looking effeminate, especially if you’re a bigger guy that carries a lot of weight in your chest.

The other issue for big guys is that a deep v-neck can also end up looking more like an arrow to your below than anything else. Of course, that requires a pretty deep v-neck but that’s why the 3-inch rule is a good start point.

Even if neither of those problems is an issue for you, a super deep v-neck just looks a little strange which is reason enough to skip it.

Why Big Guys Should Wear A V-Neck

Despite so many folks suggesting that big guys avoid the v-neck, there’s actually a lot to love about this look!

This is the biggest reason to rock the v-neck and for guys with rounder faces a v-neck can be very complimentary.

V-necks are often recommended for shorter guys since they can help give an overall longer look. The idea is that the eye will follow the vertical angle of v-neck and lead to making a guy appear taller.

But not only can this trick work to make you look taller, but it also helps big guys look leaner- especially around the face. It’s the same effect that you get from a pointed collar on a nice dress shirt and both v-necks and pointed collars can make rounder faces look longer.  They can also make necks seem longer which is ideal if you have a bit of a double chin.

It’s Okay To Show Off A Little Chest Hair

Chest hair has gone in and out of fashion over the years and while we’re a long way from the ’70s and ’80s when chest hair was king but there are still plenty of women and men who find it attractive.

Of course, it’s not going to please everyone but that’s a lost cause already. If you’re a big dude with a hairy chest, own it and use a v-neck to show it off!

To Add Some Variety To Your Wardrobe

Clothing options for big guys and fat dudes can get very boring…very quick.

When you’re stuck picking clothing based on size before anything else you can end up with a wardrobe full of classic cuts and boring colors.

Working a few v-neck shirts and other garments into your rotation helps you break things up which is not only more interesting for you but also helps you stand out too.

How To Pull Off The V-Neck

But it’s not all sunshine and roses here and there are plenty of things to avoid when you opt for the v-neck. Many of these are true for all guys (and not just big dudes) but we’ll cover them anyway.

We’ve established that the general guideline for v-neck depth is around 3 inches or no deeper than the very top of your armpit. Of course, I’m all about breaking traditional style rules for big guys so feel free to go deeper but that’s usually a good starting point.

The depth of your v-neck will also depend on the type of garment. Cardigans for example will often have a deeper v-neck and it’s all part of that specific style. Tanks tops, on the other hand, are best with no v-neck at all especially when it comes to bigger guys.

Polo shirts are another great option for big guys and even though they aren’t exactly a v-neck you can get the same effect by unbuttoning the buttons. Because of that, all the same rules apply there too!

So make sure you understand not only the general guidelines but also the basics of what you’re wearing!

V-necks are great for elongating features but the big risk is ending up looking effeminate when that may not be your intention.  Having sleeves that are too short almost guarantees that the look is going to come off as effeminate.

Check out this image below: 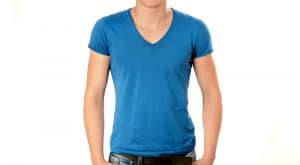 I know, he’s not a big guy or a fat dude but the effect is the same. Not only is the v-neck a little deep but the short and poor fitting sleeves make this look like a woman’s shirt. I’ve removed his face to drive the point home because while you can tell that it’s a man the look is still pretty darn feminine.

And this guy is skinny! If you or I go for this look with some extra weight on our chests the effect will be even more dramatic. Nothing wrong if that’s the look you’re going for but great fashion is about deliberate choices!

So keep sleeve length at least halfway down your arm and especially if you’re rocking the v-neck.

Know When To Layer

When it comes to a v-neck t-shirt, you want to just let your chest hang out and layering isn’t required.

But when it comes to v-necks with most other garments, especially cardigans and some sweaters, layering is an important part of pulling off the look.

Obviously, you know that a deep v-neck on a cardigan with no shirt would look weird but you also can’t just wear a t-shirt underneath.

As a general rule, the deeper the v-neck the more important it is to have a collared shirt underneath- more specifically, I’d recommend a dress shirt with a broad collar to balance the deeper v of whatever you’re wearing. This combination takes the deep v-neck from casual to classy and it’s a great look for any formal event.

I’ve already mentioned that chest hair is a plus of rocking the v-neck shirt but it could go either way.

Chest hair is one of those things where there’s no middle ground- you either rock a lot of it or shave it down entirely.

What you don’t want to do is have thin or sparse chest hair.

That look is just going to come off strange and the effect is similar to shaving your face and missing a spot. Those sparse hairs will really catch the eye and it won’t matter how much that v-neck elongates your face- people are just going to be looking at your chest hair!

Double Down With A Beard

A beard can look great with a v-neck especially if you opt for a longer, more triangular-shaped beard that can help elongate a fatter, rounder face. That will double down on the effect of the v-neck and give your face and upper body a longer look.

This is great for big guys as you’ll end up looking taller and big.  A beard certainly isn’t a requirement but it’s a nice way to go all-in on the look.

So should big dudes and fat guys wear v-necks?

As long as you keep the sleeves a reasonable length and avoid going for a v-neck that’s deeper than 3 inches you shouldn’t have a problem pulling off this look and looking great!

On top of the collar depth and sleeve length, pay some attention to your chest hair situation and you’re good to go.

What do you think? Are you ready to rock the v-neck?

Leo is fat and proud! Coming in at 405 pounds, Leo has been fat his entire life and is constantly on the hunt for products that help improve the life of fat folks around the world.

link to 6 Best Cardigans For Fat Guys and Big Dudes

Looking for the best cardigans for fat guys and big dudes? We've collected 6 of our favorite choices with styles for every big guy.

Looking for the perfect plus sized capris for women? We've picked our top 7 capris that look great on full figures with options for every situation!