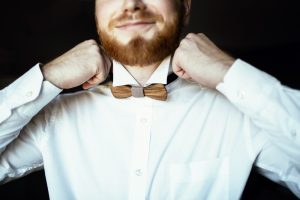 Fashion can work differently for fat guys and big dudes but being large is rarely a reason to completely skip a style you like. Instead, bigger guys will need to make a few adjustments to really pull off certain looks.

Whether it’s rocking the turtleneck sweater or pulling off a v-neck, fat guys can keep up with all the latest fashion trends as long as they avoid some common pitfalls.

But what about bow ties? Can fat guys look good in bow ties and should they try to pull off this look?

Fat guys can look great with a bow tie as long as they choose one that’s big enough to match their body. When worn poorly, the bow tie may make round faces appear rounder but this is easily fixed by choosing a larger bow tie and styling with a vest or waistcoat.

That’s the quick answer but there’s a lot more to cover so if you’re interested in diving deep into the world of fashion, fat guys, and bow ties then keep reading!

Okay, you’ve probably seen it mentioned before that big guys should skip the bow tie but why is this the prevailing wisdom?

Let’s look at two big reasons and figure out whether or not these actually hold up.

Most fashion experts suggest that guys match their collar to the shape of their face. Because the bow tie acts as an extension of your collar in many ways, you could apply these same face shape rules to styling a bow tie.

These guidelines suggest that guys with rounder faces skip wide collars in favor of longer, pointed collars that acts as a contract to their fatter face. It’s something we covered in more detail in our review of the best dress shirts for fat guys but because a bow tie is always wide, it’s tough to avoid taking things in the opposite direction!

But is this really such a bad thing?

While the fashion gurus will disagree with me, I don’t think this makes as much of an impact as you’d think. Especially if you’re on the bigger side of fat. A pointed collar may elongate a face that’s in between narrow and round but it’s not going to do much for a truly fat face.

So if you’re not sure or have other options, skip the bow tie in favor of a vertical line but there’s also nothing wrong with leaning into your look and rocking the bow tie despite the prevailing wisdom.

Many folks will argue that fat guys shouldn’t wear horizontal lines of any type- whether that’s a striped shirt or a horizontal bow tie. But when we explored the issues of stripes with more depth, we found that there’s no reason fat guys can’t look great in stripes.

In fact, despite the common belief that stripes will make you look wider, we found that they can actually have the opposite effect and provide a great contrast with bigger bodies.

Additionally, because bow ties have so much additional texture to them, not to mention contrasting color options, they’re pretty darn different from the striped lines you’d see on a shirt or even a sweater. In other words, there’s too much variation with bow ties to really put them in the same category as horizontal stripes so we can take this guideline with a big grain of salt.

How Fat Guys Can Pull Off A Bow Tie

While the downsides to big guys and bow ties are unclear at best, there are still some things to consider before you try to pull off this look.

Go For A BIG Bow Tie

The size of any accessory should match the person wearing it and it doesn’t matter if we’re talking about bow ties, watches, or anything else.

A man of significant size with a micro bow tie will just look silly. It won’t have anything to do with horizontal lines, round faces, or contrasting colors but everything to do with a simple mismatch of size. Skinny guys that try to pull off big accessories will have the same problem and it’s all about working with your body and not against it.

So don’t be afraid to go for a BIG bow tie to match a big body.

Consider A Vest or Waistcoat

A traditional tie fills up a lot of space across your chest and belly. But a compact bow tie doesn’t and this can end up being a problem whether you’re fat or skinny.

That’s why a vest or a waistcoat can work so well with a bow tie as these accessories can bring back the balance you lost by skipping the traditional tie. Without one of these accessories, you could end up with a ton of white space that just looks a little off.

Okay, this one applies for guys of any size but you’ll want to skip the pre-tied bow ties in favor of tieing it yourself.

Yes, there will be a noticeable difference, even with bow ties!

It’s easier than you think and these guys do a great job showing you exactly how to tie a bow tie in less than 5 minutes:

Make Sure You Feel Confident

A lot of fashion simply comes down to confidence and we can all think of guys who pulled off wild looks because they were overflowing with swagger.

You don’t need to have rock-star levels of confidence to rock a bow tie but you do need to feel good with what you’re wearing. Unless you’re wearing the bow tie as part of a groomsmen outfit there’s a good chance you’ll be one of only a handful of guys wearing one. That takes a little confidence to pull off so make sure you like the way you look before you step out the door!

There is no shortage of fashion experts that are telling fat guys to skip the bow tie or that it just can’t work with a round face. Then there are others (like myself) who are telling you to live life big and rock the bow tie!

So what are fat guys and big dudes supposed to do with all this conflicting information?

See if you like the way you look in a bow tie and work from there. There’s no fashion law that’s stopping you from wearing a bow tie and looking great while you do it! Make sure you go big, consider a vest or waistcoat, and turn on the confidence to make this look really work.

What do you think? Are you going to go for the bow tie?

Leo is fat and proud! Coming in at 405 pounds, Leo has been fat his entire life and is constantly on the hunt for products that help improve the life of fat folks around the world.

Do black men prefer big white women? While this is a stereotype, there is a truth to it because of cultural acceptance of body types. Keep reading!

Continue Reading
link to Chubby Vs Fat: What's the Difference? (With Pictures)

What's the difference between chubby vs fat? Find out why chubby people are regarded as a little overweight, while fat is associated with obesity!